Day 8 - Lost the plot, and almost lost the lot!

I lost £328 today, but it could easily have been more than £1000. This raises huge doubts about whether I am cut out for trading.

Trading requires patience, discipline and an aversion to gambling. I have little patience, no discipline, and I gamble at the drop of a hat. And I don't know if I can ever change.

It may seem completely stupid, but I am seriously thinking about increasing my stakes from £300 to £500. The reason for that is that I want to take fewer risks, but of course, that means that each risk will be bigger. I'm aiming to make fewer, better quality trades, and reduce the number of bad, impatient trades  Another option would have been to lower my expectations and make quality trades at the same stake level, but that doesn't turn me on. It could all go belly up very quickly.

Sometimes when you enter a market, the price can immediately, in a split second, jump six ticks against you, and there's nothing to warn you that it is about to happen. You just have to deal with the situation that is before you. 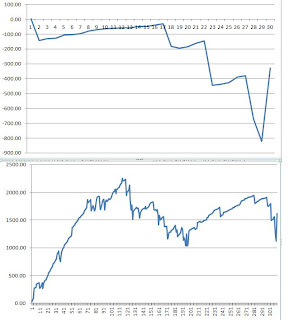 I traded 33 races today with just one tiny loss. It might sound strange, but it was because I was doing so well that I was anxious for the racing to finish. The reason for that is that I feared that one big loss would come along and cancel out all the profit I'd gained from my hard work. I can remember counting ten races still to go, and wishing they'd hurry up and finish. I was also trying to be extra careful not to lose. That meant that some races produced tiny profits. But those ten races produced a profit of about £60, which I consider to be pretty good money. Although the winnings per race may be tiny, when you add them up, they are quite significant. While I realise that I could lose all of today's profit on tomorrow's first race, that doesn't seem as bad as it would have been had it happened tonight.

Profit for the day was £281. And that takes me to my highest closing balance since I began. It also completes my first week. In a way, the time is just as important as the money, because the longer I can continue to be in profit, and better still, increase the profits, the greater the chance that I can actually do this profitably long term, and that it's not just a fluke. 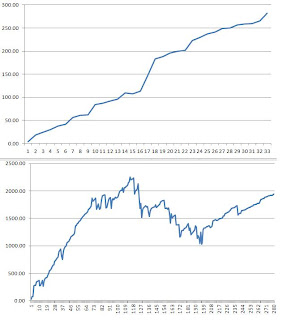 I was like a completely different person trading today. At times it felt like I really knew what I was doing. I was seriously planning to take this up as a career when it came right back and bit me on the bum with a £167 loss, just to wipe the smug look from my face.

It felt like a very long day today, starting at 1:30 and finishing at 8:20. I would maybe need to get in training for this if I was to do it full time. It's probably a young man's game, and that's not me anymore.

I'm off to have a well deserved drink. Back later with my day's figures... 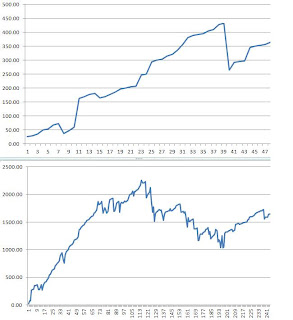 I had a terrible day that has not only cost me £500, but has knocked my confidence for six. I felt I got very few breaks. The markets constantly moved against me, and I was able to find the winners with amazing regularity by laying them and leaving them red. When I go in play, and I nearly always do, the prices go against me 90% of the time. It's almost as if they know!

It would even have been worse, but I profited by £260 in the last two races. If I'm to succeed with this, then I can't have many days like that, unless I have more days like my first two.

It still leaves me £1300 ahead and that allows me a fair chance to see if I can make something of this. A good winning day tomorrow with everything going my way would certainly help my confidence. 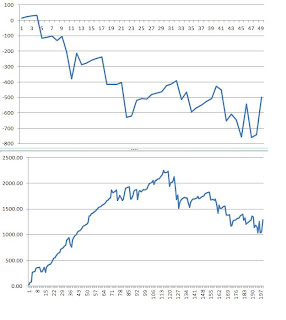 Looking over my old trading record

I had a quick look back at my old trading record, and it surprises me that, despite the erratic way in which I trade, I produced fairly consistent profits.

My first day of trading was 2 July 2009, and I recall that I made over £6000 in July 2009. There were lots of losing races, but very few losing days. And that was despite the fact that when I lost a race, I generally lost BIG.

This time around I seem to have continued just as I left off. The question I keep asking myself is "Is it just luck?"

I described how on Thursday I was very lucky to turn an almost certain £230 loss into a £200 profit. There was no skill in that at all. However, yesterday there was a race where I felt very unlucky to lose rather than make over £150 profit. So maybe it is just swings and roundabouts.

Someone posted a comment saying that in order to tell if you have an edge, you need to test it with 1000 bets or more. I must have traded well over 1000 races in those 56 days, and surely luck would have evened itself out by now.

I know that it's considered wrong to let trades go in play, but maybe in the long run it doesn't matter. Maybe they just even themselves out.

As well as the £14,000 profit, there's also the commission I've paid on those races. I have paid well over £100 commission on these four days alone.

One thing I was surprised to notice was that I had 34 winning races on the trot the other day. I would estimate that the proportion of races in which I am all green at the off to be less than 10%. So it is likely that in 30 of those 34 races, I was red on at least one horse, and probably more. It seems almost impossible that all of them ended in a profit. Those 34 races produced a total profit of over £1100.

I would much prefer to make £7 or so on every race before they jumped off, but maybe what I'm doing actually works. I'm probably at a greater risk of heart attack than the more conventional traders though.

One other thing, in 55 of those 56 days, I was probably full of alcohol by the end of trading. I intend to take this more seriously, and yesterday I kicked the alcohol into touch, at least until I had finished trading. A little alcohol can help you relax, but I was so relaxed at the end of trading on Saturday that I could barely stay awake!

A profitable day today that cancels yesterday's losses. £146 is not bad for a few hours sitting at a computer, and we had an hour when Betfair was unavailable. 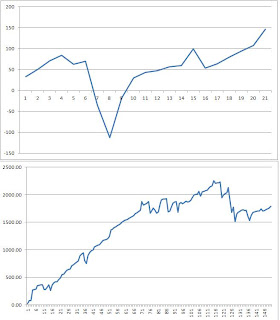 Today's and Total Profit and Loss

Crash, bang, wollop! Back down to Earth with a losing day.

I got off to a bad start with the 12:55 at Newbury which I think was maybe the Arabian race or something. It suffered from poor liquidity, and I shouldn't have got involved. I lost the second race too, but I was still feeling confident that things would pick up. Confidence is a by product of winning. You don't just gain financially, but you begin to expect to win.

I felt there were too many races going off too soon after each other on a busy Saturday, but ironically that seemed to be when I did best. It was when things quietened down in the evening and we got back to a more comfortable 10 minute gap between races that things went badly wrong.

Firstly and most importantly, I must stop drinking alcohol while I'm doing this. I'll say no more about that for now because hopefully it will no longer be a factor.

Secondly, I need to learn to stick to the plan and trade, and not just simply gamble in an attempt to chase my losses. I know that I lose when I gamble, so there's no point in doing it.

Due to lack of time and liquidity, I didn't trade at Tramore. I wish I hadn't traded at Lingfield where in five races, I lost £725. 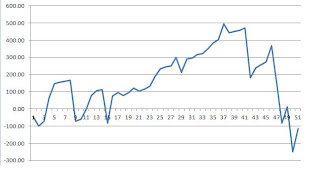 Profit and Loss for the day 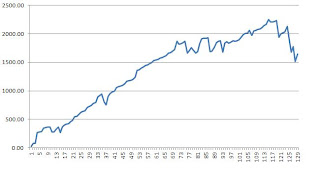